3 Idle Boatwomen to Remember in November 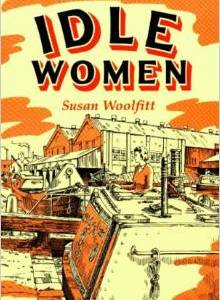 This week’s Armistice Day marked100 years since the outbreak of the First World War and the UK remembered the men and women who gave their lives in the two World Wars. A lesser-known contribution to the war efforts was that of the “Idle Women” on the canals.

During the Second World War when so many men were called away to fight, a number of women took to the waterways to make essential cargo deliveries with narrowboats. Previously the boating families that had worked on the canals had been a closed community, but during the war these (often middle-class) women learned to work alongside the traditional boaters. They were trained to handle a pair of boats, in teams of three. They were jokingly referred to as the “Idle Women” because of the Inland Waterways initials on their badges, but the days were long and the work was hard and sometimes dangerous. Not only were accidents frequent when loading cargo or operating boats and locks, even among experienced boaters, but there was the added risks of German bombers who would target the industrial areas where the boats made deliveries. A pair of boats consisted of a motor and a butty and the girls lived in a small boatman’s cabins at the stern of each boat, with no room for luxuries.

It’s fascinating to read some of the memoirs of the women who undertook this work.

The Amateur Boatwomen by Eily Gayford describes in great detail the practicalities of the life on the boats. Eily was one of the first boatwomen and trained many of the other girls to do the work. She was affectionately named “Kit” by the traditional boating families.

Emma Smith was eighteen when she went to work on the boats. Her book, Maidens Trip is a fictional boat journey but the characters and events are based on Emma Smiths real experiences of working as a boatwoman during the war.

Idle Women by Susan Woolfitt also describes the difficulties and dangers encountered by the trainee boatwomen, and she was trained in her boating skills by Eily Gayford. She describes the everyday working life of a boater and a bombing raid on the Regents Canal in London.

Despite being descriptions of a difficult way of life the books are pleasantly uplifting as the girls triumph over adversity and enjoy travelling through the English countryside.

Can you recommend any good books about boaters in war time? Let us know on Facebook or Twitter.