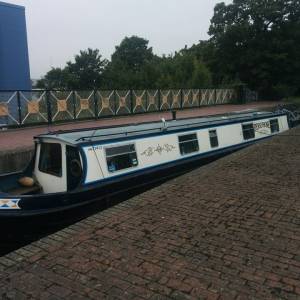 I travelled through Birmingham recently, by train. Train travel is often a good way to discover waterways you haven’t yet seen, because many of the railways were built alongside the canals. Out of the window I noticed a really cool urban aqueduct; they really have got more canals than Venice up in Birmingham don’t you know?! The contrast of a peaceful navigation straddling a busy modern road reminded me of the aqueducts I have known and loved on our own lovely, local Grand Union canal.

Aqueducts are pretty rare on the southern Grand Union and they do not compare with the grandeur of the Chirk or Pontcysyllte aqueducts on the Llangollen in Wales, but they’re always a welcome novelty on a leisurely cruise. (If you've never been across the Pontcysyllte Aqueduct check out Dan Brown's one minute video.)

Near Park Royal in West London the Grand Union crosses the A406 on a large aqueduct. One minute you’re cruising a quiet and leafy suburban canal, and then suddenly you are high above several lanes of roaring traffic. It is a strange contrast between the tranquillity of the waterways and the rush of modern life. I love boating across there. If you’re travelling in a car below as a boat passes over above, you may just see the steerer’s head floating mysteriously along! If it’s their first time across the aqueduct the boat’s captain is likely to be taking photos as well as steering. So many people don’t even know it’s there, but if they do it may make them wish that they could swap their commute for a moment on a narrowboat.

The Slough arm branches off the Grand Union at Cowley, just south of Uxbridge in west London. At the beginning of the arm there are three pretty little aqueducts over Fray’s River, the River Colne and the Colne Brook. Weeds and reeds lining the banks, and trees and bushes below actually make it very pretty. Crossing these little aqueducts has an isolated rural feel, despite being situated right between Langley and west London.

Cosgrove Aqueduct is a cast iron trough crossing the River Great Ouse and it was built to replace an earlier aqueduct which had collapsed. It’s further up the Grand Union north west of Milton Keynes. When it was built in 1811 it was known as the “Iron Trunk”. Cosgrove is a beautiful and tiny little village and it’s worth mooring up to take a look around.

So, now you know a little bit about the aqueducts of the Grand Union and that it's not always water under the bridge! Aqueducts, swing bridges and staircase locks; what navigable feats of engineering do you like to discover?