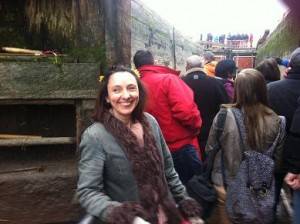 Peggy in a drained lock.

Firstly, an interesting fact: Camden Lock in London is not called Camden Lock. If you’re familiar with the Camden area you’ll know that it’s actually called Hampstead Road Lock and can be found right next to a part of Camden market. Secondly, there are actually two locks, side by side at this location in Camden: It’s now the only twin lock remaining on that canal.

The Canal and River Trust are about to begin £130,000 worth of repairs to the two locks including replacing both sets of lock gates and timberwork. Last weekend the lock was drained and opened to the public, allowing people to descend into the lock chamber on foot to see what lurks below the murky water of the Regents Canal.

If you’re into canals I can confirm this is a fascinating experience, having walked around inside a drained lock during the Marsworth flight open day in January this year.

At Marsworth, (Hertfordshire) scaffolding was erected and visitors could descend some temporary steps to stand on a platform in the bottom of the lock. Experts were on hand to explain how a lock works and a little about the work they were doing on the flight: A number of lock gates were being replaced. As well as the lock a length of canal was also drained and it was interesting to see how surprisingly shallow the canal bed looked and also to observe a small variety of shellfish that apparently live in the canal. There was barely any litter, but there were a few tyre fenders lost from passing boats.

In contrast, according to this BBC news video there were plenty of bits and bobs to be found at the bottom of Camden lock, including numerous lost windlasses from boaters who’d once passed through. These locks are nearly 200 years old, so they really built ‘em to last in those days! This year marks the 200th anniversary of the building of the Regent's Canal.

Camden town with its bustling markets, brightly painted boats and beautiful Regents Park is largely to blame for my initial interest in canals and boats. As a young twenty-something woman, I moved to London to seek my fortune and was living in a shared flat in Camden. Down beside the lock one day I saw a beautiful narrowboat with a For Sale sign on it. It had never occurred to me before that day that people actually lived and travelled on these boats, and that perhaps one day I could own one…

An idea was born, information was gathered, a bank loan was sought and many waterways magazines were read as I pored over glossy brokerage adverts. Yes this was way back before I had heard of the internet too – how much easier it is today to find your ideal boat!

To find a restoration open day near you visit the Canal and River Trust events listings pages.

Tip: If you love all things canals and boaty, you may like to sign up to get a free article from us in your inbox every week. We never share or sell email addresses, you will only receive Boatshed blog updates by subscribing here..

You may also like:
Living on a Boat: The Boatshed Guide (free) / Help! I want to sell my boat! / Christmas gifts for canal boaters / Don’t miss: The Boatshed Grand Union Daily/ A slideshow of our boat of the moment./More articles.