Can you recommend any narrowboat films? 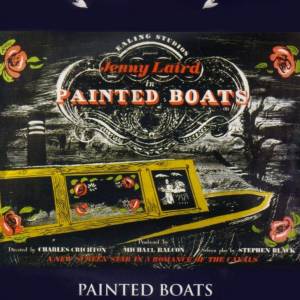 After watching The Bargee last week I thought that a canal DVD would make a good Christmas present for someone and I turned to the internet to see what I could find. I stumbled across a great discussion on the Canal World forum where boaters were exchanging ideas for spoof narrowboat movie titles.

But are there any real films existing for canal enthusiasts?

Painted Boats is the one I’ve yet to see... a docu-drama filmed in 1945 by Ealing studios. A lovely Amazon review says, “Part documentary, part light romance, part propaganda. It is also quite possibly the most beautiful depiction of English canals on film you will ever see.”

It follows two cargo carrying working boat families at a time when their idyllic way of life was under threat. The younger generation were considering breaking away to discover a life away from the canals…

Other than that, I don’t know of any films – just TV programmes.

There was the 1980’s BBC series The River starring David Essex. Davey Jackson was a solitary canal lock-keeper allowing Sarah the boater to stay with him while she awaited engine repairs. This was a rom-com with plenty of shots of the lovely English countryside and plenty of David Essex’s music. Not a lot of boating in it though!

In the TV series The Boat That Guy Built motorcycle racing star, mechanic and engineering enthusiast Guy Martin enlists his mate Mark Davies to help him renovate a narrowboat, using the best of British inventions from the Industrial Revolution: It’s a fun way to learn a bit of history. The series was released as a DVD box set in 2012.

But I think I’m going to opt for Painted Boats. What would you recommend? If you’ve seen a good narrowboat film let me know on Facebook.

You may also like:
Living on a Boat: The Boatshed Guide (free) / Help! I want to sell my boat! / Christmas gifts for canal boaters / Don’t miss: The Boatshed Grand Union Daily/ A slideshow of a 65ft semi-trad./More articles.