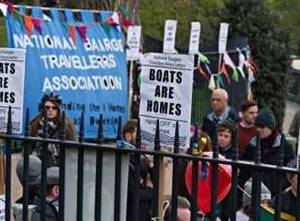 The Canal and River Trust have recently announced a proposal to change the mooring times in three locations on the southern Grand Union Canal, at Berkhamsted, Braunston and Marsworth. The proposals will reduce 14day moorings to 7 days, 48 and 24 hours.

The Southern Grand Union is an area close to my heart; I Considered it to be my home for several years of the time I spent living aboard. I’ve moored in Berkhamsted on many occasions and have several boating friends based in the area. My family took a winter mooring at Bulbourne near Tring on more than one occasion, and when our children grew old enough for school we secured a permanent residential mooring in Marsworth. The area affected by the proposal is also a significant part of the area covered by our brokerage here at Boatshed, so many of our customers travel and moor in and around these locations.

An online petition to stop the reduction of mooring times in these locations has already gained over 800 signatures. The petition page explains that reducing the mooring time limits in other areas, has had a detrimental effect on the local community,canal side businesses, canal traders and boaters with or without a home mooring. Supporters of the petition believe the proposals will “further concentrate boaters to ever decreasing areas, therefore causing more issues for CRT enforcement and those boaters who wish to stay in these areas for 14 days.”

The southern Grand Union Canal is popular with many different boaters and there is often high demand for moorings at popular locations. With the help of volunteers the Trust have been monitoring some of the busiest locations to better understand how the moorings are used. CRT hope to ascertain if a change to the moorings will enable as many boaters as possible to visit more popular places. They have recently undertaken a public consultation on the proposals, and a large number of people have submitted their views.

Changes to local mooring regulations are often controversial,and emotions run high when people’s homes and lifestyles are affected. Another current petition demands, Stop the Eviction of Boat Dwellers! It requests that the prime minister act to “protect the homes of itinerant boat dwellers in the UK by stopping the Canal and River Trust from refusing licences and pressuring boat families into homelessness.”This petition has now reached over 23,000 signatures.

The law states that those with a continuously cruising licence must continue their journey after 14 days in one place. However, during the last year CRT have begun refusing to renew the licences of boaters without permanent moorings who are deemed to be travelling insufficiently. CRT has reduced mooring times in some areas from 14 days to 24 hours and have concreted over canal banks making it impossible to moor in large areas of London and other urban areas.

On 16th April 2016 boat dwellers will be joining the People Assembly demonstration to march with others demanding decent housing: Boats are Homes, National Demonstration.

If you’re thinking of buying a boat but are unsure of continuous cruising guidelines and mooring options check out our article How to Find a Mooring.