Canal Boaters Join 150,000 Protestors on the Streets of London 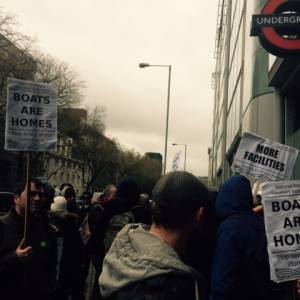 Canal boaters joined the People’s Assembly demonstrators last Saturday 16th April, to march for health, homes, jobs and education. The anti-austerity protest brought 150,000 to the streets of London and demanded David Cameron’s resignation,after the revelation that he profited from his father's offshore investment fund.

Among the various groups and organisations joining the protest were The National Bargee Travellers Association. Live-aboard boaters of all ages, including families, travelled to London to march from Gower Street to Downing Street. The boater’s had joined the march to deliver a petition against the Canal and River Trust’s policy that threatens boats without a home mooring with restricted licences and eviction. Protesters also took the opportunity to raise awareness of the need for more mooring rings, better canal maintenance and more facilities (e.g. water taps and sewage points.) Placards bore the slogans, “Boats are Homes,” “Don’t Reduce Mooring Times” and “No to the Evictions of Boaters.”

Even the BBC have covered the issue, recently featuring a Wiltshire based family who have been refused a new annual boat licence by CRT, and instead given a restricted six month licence. They have been travelling along a 15-mile stretch of the Kennet and Avon Canal for several years and the children attend school in the area. However, they are now at risk of losing their licence and possible eviction as their cruising pattern is considered unacceptable by CRT.

The BBC reports that the Trust has so far issued 652 restricted licences to boaters it believes are not travelling within the spirit of the 1995 British Waterways Act. The law states that boats must be used "bone fide for navigation… without remaining continuously in any one place for more than 14 days or such longer period as is reasonable in the circumstances".

A statement from The National Bargee Travellers Association says that the petition, Boats are Homes, has been signed by more than 27,000 people. The petition asks the government to put pressure on CRT to end their policy and stop the unnecessary eviction of boaters.

The NBTA is concerned that since the new CRT policy was introduced in May 2015 1,130 boats without a home mooring have been given a restricted licence, and boaters on a restricted licence are more likely to be evicted from their homes. They report that the number of boats without home mooring has declined by about 600 since the start of CRT’s new policy.

The Canal and River Trust’s published guidance to boaters states: "Unacceptable reasons for staying longer than 14 days in a neighbourhood or locality are a need to stay within commuting distance of a place of work or of study (eg a school or college)."

However, residential moorings can be difficult to find. CRT manages some moorings which are often offered on an auction basis, with guide prices ranging from about £2,300 to £5,800 a year. The alternative is to find a permanent mooring in a private marina.

If you are considering living aboard you may like our free e-Book, Living on a Boat, which offers advice and information about mooring and continuous cruising. We also have a number of boats for sale with a mooring.

You may also like: Warning: Boaters Facilities Under Threat

Get regular boater’s news and views delivered straight from our blog to your inbox – sign up here and get a free e-book about how to sell a boat! 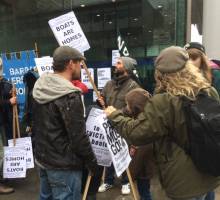 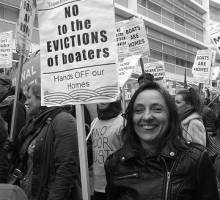