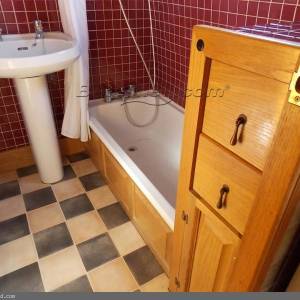 It’s time to come clean about narrowboat bathrooms, so what do you want to know?! I asked the canal boaters of Facebook, what they wished they had known before buying their first boat and what tips and advice they had to offer. Before I had children a shower was all I needed on board my narrowboat, but when we became a family I had to improvise a bath, and I bathed my kids in a plastic "trug"!

Another boat mum wrote this:

“During one cold winter on our first boat, the bathroom was always freezing so we took to bathing the kids and ourselves in a big tub in front of the fire. That's great when the kids do a history field trip and the tour guide tells the kids: "In the olden days, the whole family used to bath in a tub in front of the fire, imagine that!" And our kids were like,"We did that last night!"

Here are ten ways to make the best of the smallest room on the boat:

2) For proper shower ventilation you could install a light fitting-come-extractor fan. The alternative ventilation option is an openable window with opaque or patterned glass, but remember to shut it before going down a lock flight!

3) Make sure the shower pump is accessible so that you can clean the filter. Although canal boat bathrooms can be notoriously small, check if there is space for a waste bin, toilet brush and a small set of shelves for toiletries and cleaning materials.

4) Some people recommend having a wet room – of any size and any shape, but Amy from MBSeverner Willow says, “Avoid wet rooms! Ours leaked and rotted everything beneath it!”

Boat plumbing is a common source of on-board disasters:

“Bathroom? Carpenter coming to rip ours out today – the shower pump failed, toilet got stuck open and wobbling, and the floor is rotten... Rebuild not booked yet, so it’s porta-potty and tub baths for the foreseeable future in our family!”

5) To create extra room you could mount a wash basin in a cupboard. As one boater put it, “Fancy glass bowls are a waste of space!”

6) Bunk bath anyone? One boater considered this because of the advantage of having extra storage space underneath, but has shelved the idea for now. However, Tom Rolt writes about building a bunk bath which drained by gravity, in his book Narrowboat. It also added useful storage. In 1939 there were not so many water points on the canals so Rolt filled his bath with canal water, warmed by the engine block.

One boater remembers reading it, “I think the raw water cooling pump was able to pump water into a roof box for use in the bath. I think they only had a little tank for drinking water. There’s quite an interesting appendix at the end of the most recent edition where they discuss the layout etc.”

7) Another boater said, “One thing I asked for when I had mine built (and which surprised the builder) was a sliding door. It makes the bathroom seem so much bigger – I can't think why no-one had thought of it before.”

A sliding bathroom door can make a big difference. “Our current bathroom used to seem very spacious with a bath, good size vanity unit, and porta potti. Since we shoe-horned in a small washing machine and a large cat litter tray, spacious it isn't! Standing room only!”

8) Some bathrooms incorporate the passage way, allowing the bathroom to stretch across the width of the boat. Just make sure you lock both doors when you require privacy! Mine was like that and it made the bathroom huge - for a narrowboat!

Another boater says, “Ours goes across the width of the boat. It gave plenty of space for a wide shower. We have sliding doors which both lock for privacy. And a friend who won't visit us because of that! Most of the time it's just the way through. And we've got a towel rail plumbed in to the heating system, which is a godsend in nasty weather.”

There are some good ideas and suggestions here, which made for a lively discussion on Facebook: But my two favourite comments were these:

9) “Don't leave your hairbrush on top of the bathroom cabinet: Especially when going through a lock with the toilet lid up!”

10) “No matter how full the dog's water bowl is, the bit of water always left in the underfloor shower tray tastes better.”