Boatshed Grand Union
How Safe is Your Boat From the Ghosts of the Grand Union?
Wednesday, 29 October 2014

How Safe is Your Boat From the Ghosts of the Grand Union? 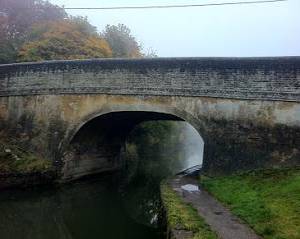 As Halloween fast approaches it’s safest to be forewarned of the possible supernatural encounters to be had on the Grand Union Canal.

If you’ve ever moored in the hamlet of Bulbourne in Hertfordshire you may recognise this bridge beside The Grand Junction Arms. I had heard a rumour that supposedly some ghostly Roman soldiers have been seen close by to this bridge. So when moored in the area I decided to head to the local library to find out for myself more about the local ghost stories. I discovered a quirky little book called Ghosts of Tring by Sheila Richards.

There is no mention of Bulbourne bridge in the book but it does report that a child was walking along with her grandmother “off thebarges” beside the canal in the nearby village of Marsworth.

“The child was tugging her hand; the grandmother turned to look. At the little girl’s other hand was a character half-man, half-goat.”

The book also reports that in the blackout during the Second World War children often saw lights on the dry canal bank above Wilstone reservoir near the Aylesbury arm. “Spies!” they called them. Also near Wilstone reservoir a young man was approached by two grey shapes near the cemetery, eerily waving their arms. (However, it turned out to be two swans.)

On the Aylesbury canal arm one night a niece and her uncle were travelling in their carriage over the Dixon’s gap bridge. The horses shied and the niece saw four men carrying a coffin over the bridge. The uncle however, saw nothing…

Perhaps the most famous ghost story on the Grand Union canal is that of the Blisworth Tunnel. This tunnel at Stoke Bruerne is a mile and three quarters long. During its construction the tunnel caved in and fourteen men died. People claim to have seen the shadowy ghosts of these poor navvies and even some say, that when travelling through by boat you may see an alternative tunnel (the one that collapsed) leading off at a tangent; invitingly lit by candlelight.

If you want to be guaranteed to experience something spooky this Halloween then head down to the London Canal Museum at Kings Cross. Each year the London Canal Museum celebrate Halloween in partnership with Camden Canals and Narrowboat Association offering a trip through the 193 year old Islington Tunnel in a spooky decorated boat. Children will receive sweets and a glowstick and may even get a chance to meet a witch!

Tarporley is a 1937 working boat which has been run as Camden’s community narrowboat for over thirty years. Book ahead for the Halloween trip on the London Canal Museum website.

Do you know any more canal-based ghosts stories? Contact me. I’d love to collect a few more anecdotes and write another article on this topic.