How Safe is Your Local #Canal Towpath? #sharethespace 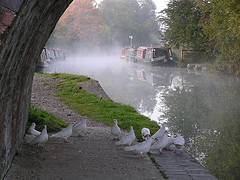 At the end of May The Independent reported that duck lanes have been introduced to towpaths in London, Manchester and Birmingham. The duck lanes are designed to encourage walkers, runners and cyclists to remember the birds and other animals who live on canals.The Canal and River Trust has painted some pathways with bike-lane like markings for ducks, as part of the Share the Space, Drop Your Pace initiative.

While this aspect of the #sharethespace campaign may raise a smile, there are very real risks of danger when some cyclists put speed before safety. A picture was shared in some narrowboating Facebook groups recently of an elderly lady who lost four of her teeth and suffered terrible facial injuries after being accidentally hit by a cyclist. Apparently the cyclist did briefly stop, but did not leave any contact details, prompting Facebook comments that described the incident as a ‘hit and run’ and an assault.

The towpath was originally used as a path for horses towing cargo-carrying working boats throughout the network, and canal boats are known for their slow and steady pace. So the Canal and River Trust’s recent Boaters Update reminded towpath users to be “more tortoise and less hare.” Their towpath code ‘BetterTowpaths for Everyone’ was produced after consultation with more than 2,000 towpath visitors and interest groups. There’s no specific speed limit for cyclists but CRT asks that everyone uses their common sense and considers other canal users.

Inner city canals have often been crime scenes; fromtheft to assault, misuse of drugs and even sometimes murder. The Manchester Evening News reported that a body was recently pulled from Salford canal as a police investigation is launched into the man's death. It is the latest in an alarming number of bodies found in Manchester’s canals. A report in the Daily Express researched the suggestions that a serial killer may be at large. 60 bodies have been found in Manchester’s canal network over the past seven years.

Despite the alarming body count in Manchester the towpath is still a relatively safe place to be. The Canal and River Trust does not recommend cycling on towpaths after dark, but if you do, use lights and look out for mooring ropes and pegs where boats are tied up. Use your common sense when considering walking on a deserted inner city towpath at night; it may be best to seek an alternative route, especially if you are drunk or alone – or both!

During the daytime the towpath dangers can include steep and slippery access paths so take care when joining and leaving the towpath. Take extra care also, when walking close to a lock, or crossing a lock gate.

To keep up with more news stories that affect canals ‘like’ our Facebook page now; it’s constantly updated with pictures and news by our friendly social media manager: Corinne.