Boatshed Grand Union
How to Learn About Boats Without Talking to Strangers
Wednesday, 30 March 2016

How to Learn About Boats Without Talking to Strangers 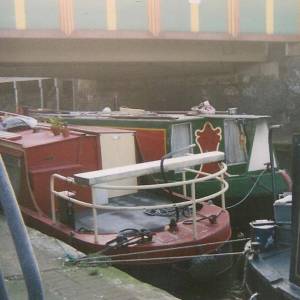 My boat & Daryl's boat at The Junction Arms

Do you have a fascination with boats and canals? Are you wondering whether to buy your first boat?

Before I bought my very first narrowboat I was obsessed with narrowboats and canals. I would stand on the canal banks of London gongoozling, and wondering about the mysterious and carefree-looking people that appeared to live aboard. I was looking for a boat for sale, but in those days it wasn’t so common to use the internet for everything. Instead, my search involved poring over canal boating magazines and visiting boat yards and marinas all over southern England.

One day I was on the towpath outside the supermarket at Ladbroke Grove when I saw two lads with their own colourful boats each, untying their ropes ready to make off west along the canal. I longed to know people like this, and to join their romantic, gypsy-like world. Smoke curled up from their chimneys and the sun glistened on the water. The first boat set off, steered by a tall, dark-haired, handsome bloke and somehow I got over my shyness and approached the second bloke before he untied his last rope.

This fellow was a friendly character, slightly older than the first. He took a puff on his rolled-up cigarette and thought long and hard.

But he was the talkative type and I had loads of questions about boats, and boat-life, so we began chattering away. It turned out that these two were headed for Harlesden, not far up the Cut, which is where I lived at that time. So we put my bicycle on the roof and he told me everything he could think of about canal boat life; the people, the characters, the sense of community and the joy of living close to nature and travelling whenever you want. When we arrived at a canal-side pub in Harlesden; The Grand Junction Arms, I spent the rest of the evening drinking with them. They introduced me to other boaters who lived aboard, who had their own permanent moorings at this pub.

With that one chance encounter I was introduced to the narrowboating community and I was hooked. Daryl, the tall, dark, handsome one had a Yorkshire accent, a joyful laugh and a passion for nature and all things to do with canal boating life. Although he had only just met me he told me I would take to it, “like a duck to water” and I hoped that he was right. It was a risk to buy my own boat and change my lifestyle to that of living afloat, but Daryl was right. I took a mooring myself at The Grand Junction Arms and lived on the Cut for thirteen years after that. Daryl and James became good friends of mine; they both let me steer their boats when I was learning to ‘drive’ and when I bought my first boat near Northampton, Daryl spent a week with me bringing it down to London, teaching me how to tie knots and use a windlass.

That was the beginning of an adventurous life. I spent some time continuous cruising and other times living on moorings in both London and Hertfordshire. I made life-long friends among the boating community, which somehow seemed so friendly, in an old-fashioned, nostalgic way: Striking up conversations with strangers while sharing a lock, and nodding ‘hello’ to those neighbours you pass on the towpath, was so different from the insulated life I once had in a flat in London.

“There are no strangers here; Only friends you haven't yet met.”
William Butler Yeats