Boatshed Grand Union
I Had a Gut Feeling: I Wanted This #Narrowboat!
Wednesday, 17 September 2014

I Had a Gut Feeling: I Wanted This #Narrowboat! 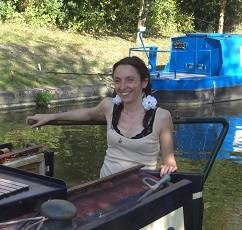 I’ve bought and sold four narrowboats in my life – not as a broker, I mean I have personally owned four narrowboats; although not all at the same time! When you own a boat it’s like a chapter in your life; the time that you spend together, the places you go together and the people that you bring along. So it’s as if every boat has its own story. Here’s the story of how I bought and sold my first narrowboat.

I was looking for a boat for a while, it was the year 2000 and I didn’t know that much about the internet. Instead I scoured waterways magazines and glossy photos and visited boat yards all over the country.

I finally found Emily Rose in Northamptonshire at a marina in Bugbrooke, which I think is now no longer a brokerage. She was a 45ft cruiser stern with an aft cabin, tiny kitchenette and a saloon with a dining table up front. The stove was in the middle and the boat was very cosy in winter. The minute I stepped on board I just had a gut feeling, I was comfortable there and I knew that I had found the boat that I wanted. At first I nearly didn’t view that boat as she was out of my price range. Back then I didn’t know that offers below the asking price may be accepted. Anyway, with a bank loan and a little help from my credit card she soon became mine. The back door was the main entrance but I could also open the double doors at the front and sit out in the well deck on a summer evening. I lived aboard in London and had an end of garden mooring outside a pub. I’d sometimes take a group of friends up to Little Venice or Camden, and sometimes we headed out west across the aqueduct to Horsenden Hill in Greenford.

After a couple of years I left that mooring and went travelling the canals with my boyfriend who also had a narrowboat. His boat was bigger; 57ft, also a cruiser witha large back deck. Eventually we moved in together on that bigger boat and decided to sell my first boat. It was quite emotional to let go as Emily Rose represented my independence and was the first home I had ever owned! I moved all of my possessions from one boat to the other, gave her a good clean and had a barbeque as a leaving party on the towpath near Uxbridge. I then took her to a brokerage and left her there to be discovered by a new owner. (This was in the days before Boatshed Grand Union existed - can you imagine?!) I think she was there for a few months before somebody found her and made her their own. Weeks or months later, that new owner may have opened the ornamental port hole mirror on the wall in the saloon and discovered the poem that I wrote and left in there. It has several verses describing my life with Emily Rose but it ends like this;

When I was moored up, you came and untied me,
When I was unwanted, you had money to buy me,
Now I’m back on the Cut, with nothing to lose,
My name is Emily Rose, and I’m licensed to cruise.

Are you ready to say goodbye to your current boat? Check out our free eBook How to Sell a Boat: The Ultimate Guide or contact us for some friendly advice.

Next week: I Bought a Narrowboat for Just One Pound!