It’s ‘adeus’ to the Azores, fishy tales and the one that got away!

JUNE 10th – 700 miles to go – and we’re back onboard Supertaff again with Neil Chapman, Curt Mundy and Curt’s niece Shea as we embark on the next European leg of the Atlantic Rally Challenge.

After our brief – but highly enjoyable – sortie onto dry land, it was time to bid farewell to the Azores. As we set sail through the lumpy conditions North East of the island of Santa Maria the fond memories of the fun we had and the friends we’d made were still fresh in our minds.

Remarkable as it seems, the interest in Supertaff – reported by some as the ‘prettiest boat in the fleet’ – and our ‘boat tours’ had really caught on. The tours had now evolved into a ‘boat crawl’ in which we were invited on board each other’s boats – and even some non-ARC boats in the marina joined in too!

A change of plan – but no change in crew

Our plans have changed over the past few days. First, we still have our full complement of crew with myself, Curt and Shea. Although she was due to join an Italian-registered Halsberg Rassy 42, Duale, a steering problem forced the yacht to retire. But we’re delighted that Shea remains with us and Supertaff for the next leg.

Second, the continuing northerly winds that were forecast for at least the next week gave us little hesitation in opting for Leg 3 of the ARC Europe Rally – an 800 mile crossing from the Azores to Lagos in Portugal – rather than the 1200 mile trip towards the UK.

Looking at the long-term forecast, we can see lighter and then some potentially stronger wind as we progress east during the next few days. To counter this and also the south flowing Portuguese current as we track east we have opted to get as far north as we can over the first few days. 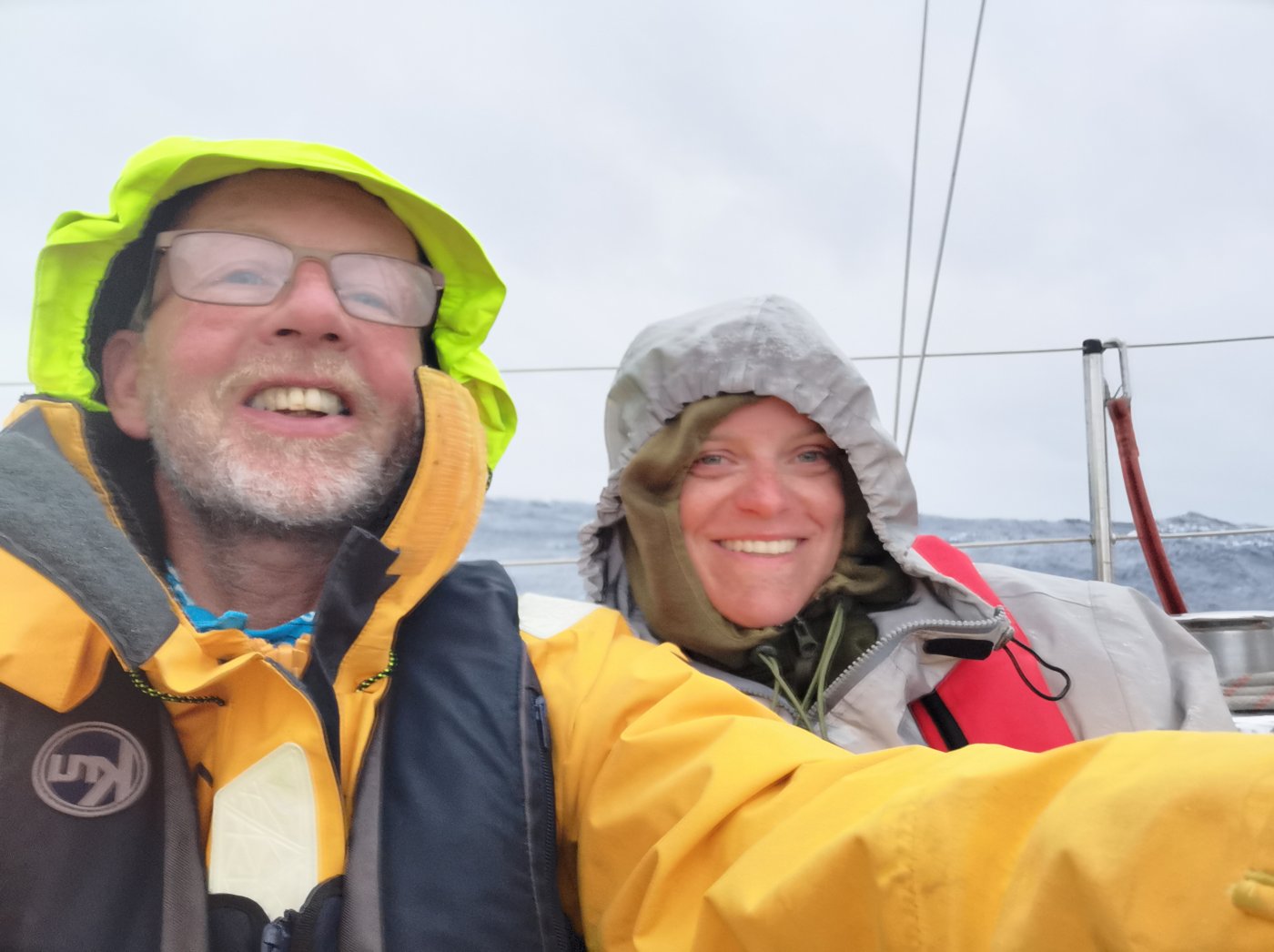 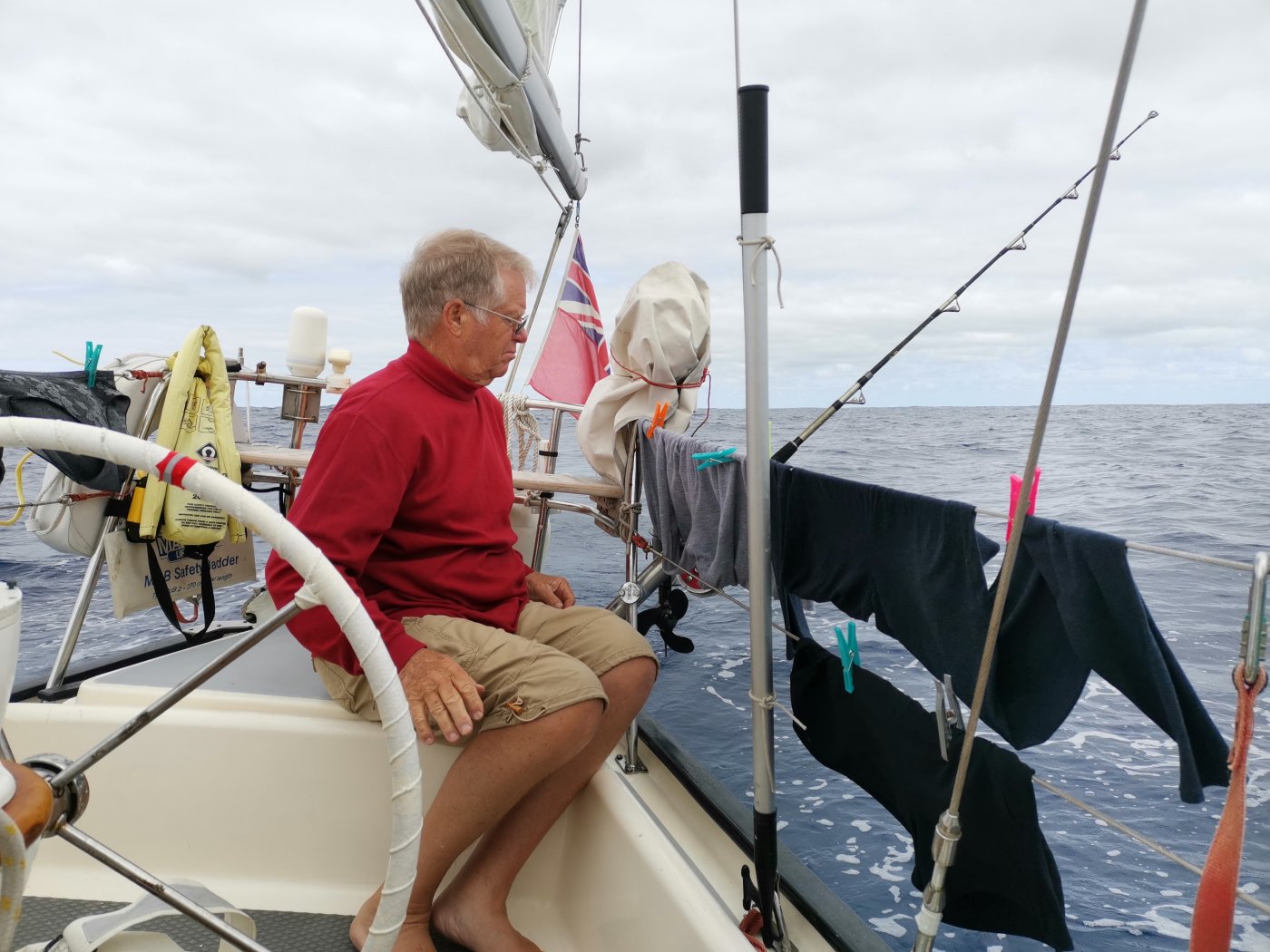 Curt setting up the fishing line

Sea legs return all too soon

Consequently I am back sitting on the floor with a good 20 plus degrees of heel and with between 20 and 30 knots of wind across the decks, plus lots of water and spray...which feels mildly familiar to the previous leg! Curt and Shea made dinner earlier, but the lively motion meant pasta only and sitting on the floor to eat. Whoops – as we fly off another wave just now!

It’s ‘crash and splash’ as water and spray are pouring all over the boat and into the cockpit. Too wet to be outside so I keep popping my head out to look around. The yacht Orion is close to us and I can see her navigation lights; but otherwise nothing else other than cloud and sea.

Having sailed a few offshore passages now, I can see where the phrase "gentleman don't go to windward" comes from. Sailing upwind offshore with big swells and large distances it is simply unpleasant!

Not only as the boat sails up and down in big seas and heels over but also it is extremely demanding physically. If holding on, bracing yourself and wedging yourself in isn’t enough – it’s the mental element too. "Sailing messes with your brain," perhaps describes it, as you become fixated with how far and for how long do I have to do this for. 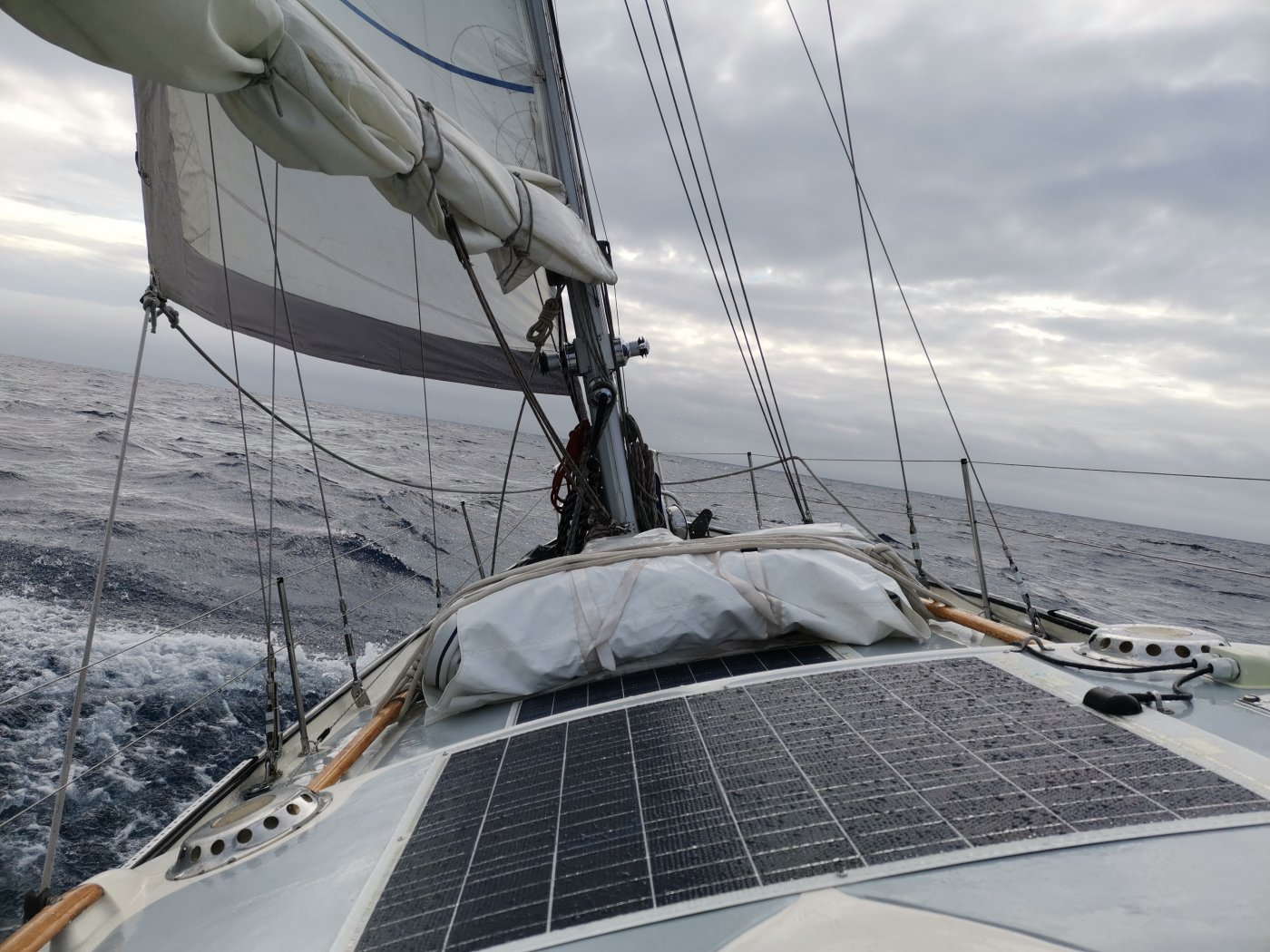 Fish on! On a positive note we landed a nice 6lb tuna earlier this evening at about eight o'clock; it grabbed the line and came in pretty easy. I prepped the fish quickly in the stern cockpit, washed down and it is waiting in the fridge for breakfast now as we had already had supper when the fish came on.

By Sunday morning, things had settled down a bit. Instead of "crash and bash" it has been more "splash and fizz" as the seas have passed effortlessly by.

The sun came out at first light and it has been a beautiful day all day. First job was to tackle the tuna from yesterday, so we decided that tuna for breakfast was the best option.

Having only caught Dorado on this trip so far, the tuna presented some challenges. Firstly, how to prepare the meat? I had prepped it last night and taken the head and tail off. Initially, we thought we would prep it like the previous Dorado by taking skin off and filleting it.

Unfortunately with no tail now on the tuna, this presented a rather slippery challenge and had to be abandoned. Next idea? Tuna fillets!

The crew complained that I had cut these too thick, (when does that happen?) but we persevered and put these in a pan and they tasted great. I decided that I preferred the meat cooked well/crispy skin so we next opted to try some fillets.

Here is another reason why you miss Google offshore, instructions! We decided the tuna was a Bonito, so quite a broad body. None of us could work out a simple way to cut it to release the fillets easily. (Remember the skin is still on – and my efforts were looked upon with interest and many comments by the crew).

The resultant fillets were a tad skinny and I felt guilty about how much of the fish went back into the sea but well cooked in oil they were superb! Having eaten a considerable breakfast of tuna we reset the fishing rod again but so far we are back again to no fish. ‘Perhaps we should have saved some?’ has been mentioned several times today!

In the dark with legs akimbo

Suitably breakfasted we set about daily tasks. For me this includes a rig check from the deck and checking for chafe on ropes and sails. I then wanted to inspect the autopilot coupling on the bottom of the steering shaft as I am still having an issue with a low frequency knock-knock on the steering at low speed.

To inspect the shaft you have to get your head and arms through a locker lid in the stern cockpit that is pretty small. Providing your head is aligned correctly then it will fit through the gap, then in order to get low enough in the locker to access the autopilot coupling, you need to get your legs high enough to lower the top part of your body into it.

Well, I’m not sure if it was a wave or extra roll but I proceeded to drop the torch, lose my glasses and my beanie hat in the process of the mission, most likely due to the fact that I could not get out again along with the slightly unnerving feeling of been stuck in there with my feet in the air and the other crew off watch!

Curt was quickly on hand to help and no harm done and after a coffee and a lie down I was ready for further investigation. Turns out that the "knock-knock" comes from a small amount of vertical play in the top main rudder bearing that occurs when the relative weight and buoyancy of the rudder moves it in a vertical direction when the boat pitches up and down.

It is only evident at low speed as at higher speeds the rudder shaft friction against its Teflon shaft bearings cancels it out. Nice to know it’s not a serious issue, but one to attend to when the boat is out of the water. Other than that the day has seen some good sailing.

The only other thing to report is the loss of the ship' bucket. Long story but essentially its lanyard slipped away from me and it disappeared over the stern.

I put the boat about and returned on a reciprocal course but none of us could see it in the waves. It was a nice big heavy thing and very sorry to lose it. It is funny how important things like buckets can be and how emotional you get at losing things – and become miffed at oneself for such a silly mistake.

Scores today: Fish = 0 Buckets = 0. Fortunately, we have a spare canvas bucket aboard bought by Aunty Zena many years ago that has been used for hat and gloves storage...it is now on active duty in its correct role!