It’s Not a Barge – it’s a Narrowboat! 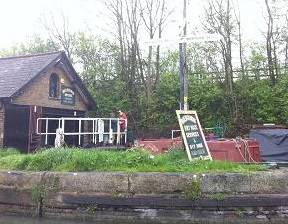 Next week sees the kick-off of a new canal documentary, this time following John Sergeant as he “barges” around Britain checking out eight of the most popular cruising routes. ITV’s press release says,

“Britain’s canal network is a true national treasure. Forged in the fire of world-changing historic events, yet set within gorgeous scenery, it’s bursting with undiscovered history and home to a vibrant community rooted in a unique way of life.”

Episode 1 follows John on the Leeds and Liverpool canal – the longest canal in Britain, and will be shown on ITV at 8pm next Friday 13th February. I’m looking forward to it – I really enjoyed Channel 4’s boating series shown last year.

Great Canal Journeys followed actors Timothy West and Prunella Scales on four scenic canal journeys in Britain and France. To celebrate their golden wedding anniversary they returned to canal boating, a hobby they have shared for decades. The series showed the beautiful landscapes around the waterways, shared fascinating anecdotes and offered a poignant portrait of a long and happy marriage, which is now challenged by the onset of Pru’s mild form of Alzheimer’s.

The series is no longer available to watch online on demand but you can read more about it here: Boatshed’s review of Great Canal Journeys.

Another popular narrowboat documentary was The Boat That Guy Built, which was first shown in 2011. Motorcycle racing star, mechanic and engineering enthusiast Guy Martin renovated a neglected narrowboat with the help of his friend Mark Davies. They used inventions from the Industrial Revolution so that the viewer got to learn a bit about history. The series is now available as a DVD box set.

If you can’t get enough of narrowboat DVDs you may also like Painted Boats, a docu-drama filmed in 1945 by Ealing studios. It features two cargo carrying working boat families at a time when their idyllic way of life was under threat. The younger generation were considering leaving the boats to consider a different way of life.

You may also like The Bargee which was filmed was filmed on the Grand Union, around Bulbourne, at the top of the Marsworth flight. This 1964 film, scripted by Ray Galton and Alan Simpson (who wrote ‘Steptoe and Son’) follows Hemel Pike (Harry H.Corbett) and his cousin Ronnie (Ronnie Barker) taking a cargo-carrying pair of narrowboats up the Grand Union to Birmingham.

If you want to keep up with all things boaty sign up and get the latest blog articles sent directly to you, plus instantly receive our free eBook: How to Sell a Boat: The Ultimate Guide.