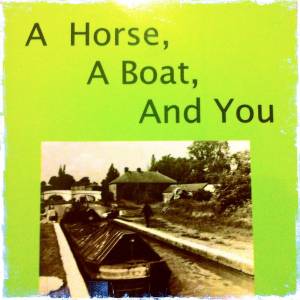 This week began with the opportunity for us all to remember the service men and women who gave their lives for the freedom we enjoy today. Whilst many stories are told and Hollywood movies have been made about people’s individual experiences of the war years, the contributions of England’s canal boaters to the war effort are not so well-known.

In May 2013 the Canal and River Trust unveiled a plaque to commemorate boaters’ efforts during the two world wars. Alice Lapworth, author of ‘A Horse, A Boat, And You’, was an advocate of the planned tribute. Her book tells her personal story about life on the canals as a working boater. As many working boaters could not read or write, written memories of the war years on the canals are relatively rare. Sheila Stewart interviewed several working boatwomen to create her fact-based novel, Ramlin Rose: The Boatwoman’s Story, which reveals much of the realities and dangers of cargo carrying on the canals during the wars. Maiden’s Trip by Emma Smith is a book based on the author’s experience of working the boats during wartime.

Also in May of this year Gloucester Waterways Museum commissioned Stroud-based theatre company Spaniel in the Works, to research and devise a play marking the role women played on the canals during the war. , ‘Idle Women’ was performed at the museum during the Tall Ships Festival 2013 to raise awareness of the women’s efforts.

The canals were nationalised in 1948 and it was suggested that most of the smaller waterways should be closed. However, at the end of the Second World War Tom Rolt published his book ‘Narrow Boat’, describing his extended journey around the system, and partly inspiring the formation of the Inland Waterways Association in 1946. We have those early enthusiasts to thank for the preservation of the waterways that we now enjoy today.

Personally, I think there’s no better way to appreciate the heritage of the canals than to get out there and get boating. As Mark Twain would say, “Throw off the bowlines... Explore. Dream. Discover.”

Find your perfect boat today by searching within your price range or browsing canal and narrowboats for sale.

Tip: Check out My Boatshed to ‘watch’ boats, monitor price reductions and see new boats as they are added.

You may also like:
Living on a Boat: The Boatshed Guide (free) / Help! I want to sell my boat! / Would you like to guest post on our blog? / Don’t miss: The Boatshed Grand Union Daily/ A slideshow of our boat of the moment./More articles.