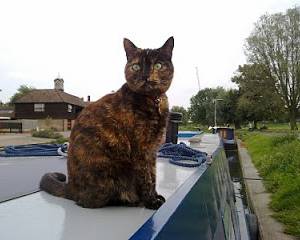 Lyra lives on a historic narrowboat

Cats have been found aboard ships since early times, accompanying explorers, merchants and navies. Popular for rodent control, the cat would get the rat before the rats and mice could eat the crew’s food supply or any edible cargo. They also offered companionship to the crew when away on long voyages and many were seen as a lucky mascot.

There have been many famous ships cats recorded in history and they’ve also been the inspiration for several novels. Some cats have survived ships sinking in war and others have gone down with the ship. A cat called Convoy on HMS Hermione had his own little hammock, and Emmy refused to board her ship RMS Empress of Ireland on May 28th 1914. The next day it sank killing over 1000 people…

Simon the ship's cat of HMS Amethyst was wounded during the Yangtze Incident in 1949, and then promoted to 'Able Seacat' . Shortly afterwards he died from an infection and his obituary appeared in The Times. He was awarded the Dickin Medal, and was buried with full naval honours.

The Royal Navy banned cats and other pet animals from all ships in 1975 but they can still be found on much smaller private vessels. They can occasionally be seen strolling along a pontoon perhaps living aboard a motor boat and taking an excursion up the river. They are also found on England’s canals. I know of one narrowboat owner who has to wait for her cats to return home before moving on to her next mooring place. I once cruised with a group of narrowboats down the Thames from Brentford to Limehouse. This is a rough journey for a little narrowboat and upon arriving at Brentford another boater bemoaned, “Our crockery is broken and the cat’s been sick!”

Chibley is a sea-going cat of more recent times, who sailed from Canada with the three-masted tall ship Picton Castle. She has sailed around the world five times and Captain Daniel Moreland recorded her life and death on the Picton Castle’s blog.

“She has licked more salt water off her tail than most sailors see in a lifetime. .. Bora Bora, Tahiti, Rarotonga have all had their fish markets raided by said cat.”

Do you have a cat on board? Do you remain close to coast or voyage out to sea? Feel free to share a picture of your feline friend on our on Facebook page.

You may also like:
How to buy a boat – the process / Thinking of selling your boat? / Boatshed registers 500,000th customer! / New Boatshed brokerage opens in Cyprus / Get started with your own Boatshed business / More news articles and stories.

See when the next boat auction is.