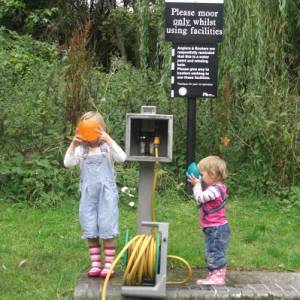 “Boaters already affected by a lack of water, rubbish and toilet facilities across the UK are protesting as more facilities are removed in London”, says a recent statement from the National Bargee Travellers Association (posted to Grand Union Boaters on Facebook 31/03/16.)

Members of the boating community and local residents discussed options at a towpath gathering in Tottenham on Sunday 27th March. The event was also a celebration of the boater community, and included music, crafts, public speakers and homemade food.

Canal boaters pay licence fees to the Canal and River Trust, who provide water points, rubbish disposal and toilet facilities. However, the NBTA are concerned that access to facilities in London is now being removed and restricted “and boaters are increasingly forced to endure primitive and unsanitary conditions.”

The CRT 2014/15 Annual Report states that CRT made a surplus of £39.4 million in that year and it is noted that they hold a reserve fund of£660 million. NBTA observed that the Trust can then easily afford to install more facilities for boaters, but earlier this year, CRT demolished a water tap,toilet facilities and a rubbish point at Waltham Cross. Facilities have been removed on the River Lee before, and with planned redevelopment at Hackney Wick, there are concerns that this will only continue to get worse.

However, while facilities on the River Lee are removed, financial investments are being made elsewhere in the south east in the form of canal-side redevelopment projects.

On the Grand Union Canal redevelopment of the yard at Marsworth Wharf is now well underway. This post-war concrete batching plant and waterways depot is to be the site of 13 new houses, plus a conversion of the Tringford Pumping Station, and some investment into local boater’s facilities.The redevelopment website www.marsworthwharf.com describes the houses as having a “very contemporary design… that compliments the retained historically important workshop building.”

This development is described as providing “much-needed investment” in the canal network.

In the nearby hamlet of Bulbourne there are more regeneration proposals including plans to build more new dwellings on a historic waterways site. The Canal and River Trust have invited locals to share their views. My personal view is that I don't mind the conversion of the current historic buildings but it's a shame they have to build new "dwellings" to make the site "commercially viable." The existing buildings date from 1882 and were still being used to make lock gates in 2003. The “contemporary design” of the new development at Marsworth just looks like a canal-side modern housing estate to me.

I’m just wondering why the Trust are developing and investing at some sites, and yet reducing and removing facilities in other places. Their aim is “to create thriving waterside communities” (See Current Projects) yet existing boating communities are protesting about a lack of water, rubbish and sewage facilities. (These views are my own and not those of Boatshed’s.)

Get our boater’s news and views delivered straight from our blog to your inbox – sign up here and get a free e-book!